The Nine Lives of the Norfolk House 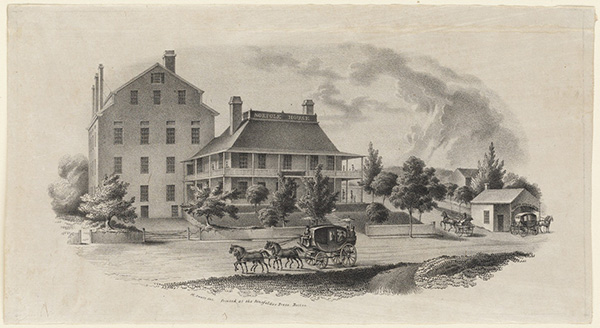 The movie Lion is the Hollywood bio of Saroo Brierly, separated from his Indian family and village at the age of five. Twenty-five years later, he uses Google Earth to locate the closest train terminal to his village.

How was thirty-year old Saroo able to find his way home? His “five-year old” self guided him through the nooks, paths, and landmarks of his childhood, whether or not they still existed.

Each step Saroo took paralleled my own memory of returning to my Roxbury neighborhood twenty-seven years after I departed. It was feeling lost, but knowing that I was not. It was my eight-year-old self guiding me through familiar routes. The crossroads, the puddingstone and the way finders overlooked by urban renewal.

Landmarks anchor a neighborhood to its past, present and future. There is currently a city-wide movement to catalogue and preserve historical landmarks in Boston’s neighborhoods of color. Priority will be given to landmarks that have been erased or are in danger of vanishing soon. Per former acting Mayor Kim Janey, “…too much of that work has been rendered invisible through carelessness, indifference, or intentional destruction, and much of the rest is still under threat.”

In Roxbury, John Eliot Square is the milestone of the Roxbury universe. By coincidence, it was saved from destructive urban renewal plans through two initiatives: the push for rehabilitation by local activists and the city’s rediscovery of historical Roxbury during Bicentennial celebration plans. A few of the oldest structures to be found in Roxbury are located right in the Square: First Church of Roxbury (1804), Dillaway-Thomas House (1750) and the Norfolk House (1853).

Today’s tourists may flock to the older structures. But, when William Dawes took his famous midnight ride to warn the Patriots that the British were coming, he started at the “Norfolk House” site. Remarkably, without a religious or British affiliation, the current building has managed to survive and reinvent itself throughout the social, economic and political evolutions of Roxbury. The story of this estate begins with the first known inhabitants of Massachusetts.

Before landfill, the only road between Boston and the towns inland was through the Neck (Washington Street), a narrow strip of land, surrounded by water, that terminated at John Eliot Square. The Neck’s path was originally laid by Native Americans and later expanded and commercialized by European settlers. Native Americans also formed the path that later became the postal route from Roxbury to Providence, Rhode Island.

The Massachusetts tribe set up seasonal camps at the base of Roxbury to hunt, quarry stone for tools and make use of the other resources provided further uphill. Evidence of Native American camps have been found at the archeological digs conducted on John Eliot Square.

John Eliot Square was the religious and political center of Roxbury. Besides the First Church, it also included the homestead (1637) of Thomas Ruggles. His estate extended west of the Roxbury Highlands (Eliot Square to Centre Street) and south of the First Church (from Dudley Street beyond Cedar Street). After his death, the Ruggles estate was further subdivided by family members who built adjacent homes from Eliot Square to Centre Street. As noted by the Roxbury historian, Francis Drake, the Ruggles family played a considerable part in the history of Roxbury for about 150 years post-settlement.

The Ruggles homestead was a critical piece in the American Revolution. The *Roxbury Low Fort, constructed on Ruggles land, and naturally fortified by Roxbury Puddingstone, prevented the British army from invading Boston via the Neck. This defense and other strategically placed forts in the area of what is now Centre, Cedar, and Linwood Streets, forced the British to evacuate Boston in 1776.

The properties on John Eliot Square were destroyed by soldiers from both sides (the Dillaway-Thomas house is the only pre-Revolutionary home to exist present-day). During reconstruction, Roxbury returned to farming and its related industries. The bucolic landscape and proximity to Boston attracted wealthy families who constructed elaborate summer mansions and cottages (the colonial version of Native American seasonal camps).

In 1781, Joseph Ruggles, a Roxbury lawyer, added his own dwelling on the Ruggles homestead. Because it was located at both a crossroad and terminal, Joseph took commercial advantage of this travelers’ mecca and operated a store from his property. It is no surprise that this central site was also the first stop on the postal road from Boston to Providence.

Upon the death of Joseph Ruggles in 1811, his estate was purchased by David Allen Simmons, lawyer, future State Senator, and husband to Martha Ruggles. Simmons sold the estate in 1827 to the Norfolk House Company. A large brick assembly space, Highland Hall, was added to the estate and later renamed Norfolk Hall. The owners also added a stage coach line that ran from Roxbury to Downtown Boston.

The location, between (Pierpont Village) Roxbury Crossing and Dudley Square, was ideal. The renovated Norfolk House was the entertainment spot for local politicians and their ilk. An ambitious, former hotel employee, Horace King, purchased the stage coach line and replaced the carriages with horse-drawn omnibuses that allowed seated passengers on both sides of the vehicle. This lucrative operation enabled him to eventually purchase the hotel as well.

In the mid-1800s, the public transportation hubs terminated at either Eliot Square or Roxbury Crossing. Tremont Street had been added as an additional road to Boston, thus, Roxbury became a convenient commute to the nearby city, and land was further subdivided to accommodate the growing middle-class.

With expansion in mind, Horace King stripped the original Ruggles mansion of its finery and moved it to the rear of the estate (Norfolk Street). The brick addition was moved to Bartlett Street and replaced with the Italianate lodging we see today. The H.S Lawrence & Company Clothing Store leased the first floor. City directories show store employees resided at the hotel as well. Another occupant, the Roxbury Athenaeum, provided 3000 volumes of reading material to its private subscribers.

Roxbury was annexed to Boston in 1868. With improvements to sidewalks and public transportation, the neighborhood increased in population. Vacation estates were further subdivided into lots that introduced brick row houses, single and two-family homes, triple deckers, and apartment buildings. Non-farming related factories sprouted throughout the neighborhood. A variety of schools, places of worship and public charities accommodated the working-class Irish, Jewish and German residents moving into the area.

Horace King lost his fortune and businesses in the financial panic of 1856-57 but the Norfolk House continued under new ownership. Despite the occasional scandals, local papers regularly posted announcements for weddings, repasts, and retirement parties. In December of 1889 notable Bostonians were invited to the grand opening of the Norfolk House Casino.

By 1914, the Norfolk House was no longer the watering hole for the well-to-do, but still a prime location in-between two transit hubs: Dudley Station and Roxbury Crossing. The estate was sold to the South End Industrial School and renamed in response to the cultural and economic shifts in Roxbury. The Norfolk House Center was converted to a settlement house and served as a social, educational and athletic community center for youth.

The Norfolk House Freedom School hosted children from both the nearby Dillaway and Nathan Hale Schools. For young men, the Reverend Michael Haynes served as a mentor to the Exquisites Club, which offered members a path to higher ed opportunities through athletic scholarships.

The revitalization of the Highland Park neighborhood, including John Eliot Square, was also underway by local community members. Rev. James Reeb, a Unitarian minister, was hired to direct the American Friends Service Committee (AFSC) Metropolitan Boston Low Income Housing Program. However, shortly thereafter, Reeb signed up for the 1965 weekend march for civil rights in Selma, Alabama where he was murdered by segregationists.

After the assassination of Martin Luther King, Jr. in 1968, the Black staff requested and gained their independence from the AFSC and renamed the initiative the Roxbury Action Program (RAP). Its mission was to rehabilitate the dilapidated housing and empty lots in the Highland Park neighborhood. RAP renamed the Norfolk House in honor of the late Black Nationalist, Marcus Garvey.

In 1986, after a decade of local activism and rediscovery by Bicentennial enthusiasts, the Norfolk House was renovated and converted to homeownership units. The estate is now home to the Norfolk House condominiums and the Marcus Garvey Gardens senior housing.

For over a millennium, the Norfolk House estate has enriched residents with its natural resources, strategic location, charitable works, and civil rights activism. The time periods in the story of Roxbury are all captured on one landmark.

Visit Roxbury. If you find yourself confused, don’t fret. A landmark, be it native, colonial, federal, Victorian, or urban, will point you in the right direction.