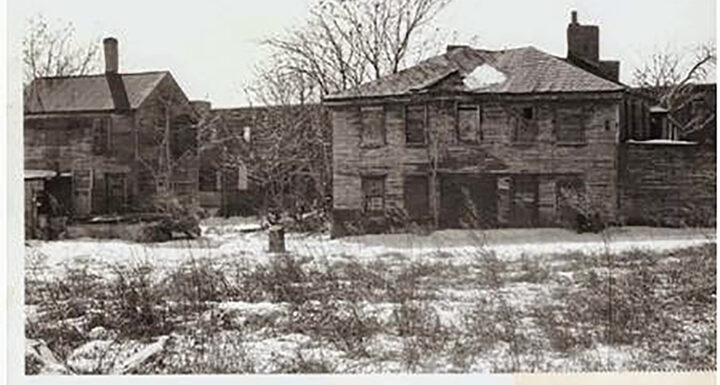 The two woodframe, hip-roof Federal style houses at 2066 and 2070 Washington Street are the only remaining pre-19th century buildings on that street in Roxbury.

The smaller house (2070 Washington street) was built ca. 1784 by the housewright Josiah Cunningham as his home and workshop.

The larger house next door, which Cunningham built for his neighbor, Captain Jesse Doggett, ca. 1788, was also used as a hotel, tavern and bowling alley known by the sign of “The Ball and Fin.”  The bowling alley was originally attached to the north side of the house and represents an exceptionally early example of an indoor facility for that sport, more customarily played in the open air.

Jesse Doggett appears to have been an enterprising energetic individual.  He was a trainband captain and his participation in the Siege is recorded by contemporary sources;

The location of his tavern on the busy route between Boston and all points south must have insured a steady supply of thirsty travelers.  That he was well prepared to receive them is indicated by the ’58 gallons of spirits’ listed in the inventory of his property made at the time of his death in 1813.

He was buried in the Doggett family tomb located near the Burying Ground wall along Washington Street.  The house continued to be kept as a tavern by his widow and remained in the possession of family heirs until 1868.

Architecturally, the houses are typical of the period and provide an instructive contrast to contemporary aristocratic mansions.  More interesting, perhaps, than the architecture is the evidence they provide of the urban streetscape as it developed along Washington Street following the Revolution.

Both houses are on their original foundations; they are placed en-to-the-street, at the rear lines of their respective plots leaving a mere 6 foot passageway between them, and close to the street line.  This somewhat odd (it was earlier thought they had been moved to this position from another location) placement indicates the transition from semi-rural to urban then occurring.  The relatively broad expanse of “frontage” could still suggest to their owners a rural setting; at the same time, their relationship to the street and to each other predicts an orientation and density which is essentially urban.

By 1820 (Hales Map of Roxbury), both sides of Washington Street were solidly lined with buildings from a point north of these buildings of Dudley Street.

RELATED READING – HBI – ROXBURY: BACK TO THE FUTURE OF ECONOMIC RE-DEVELOPMENT – PART 2